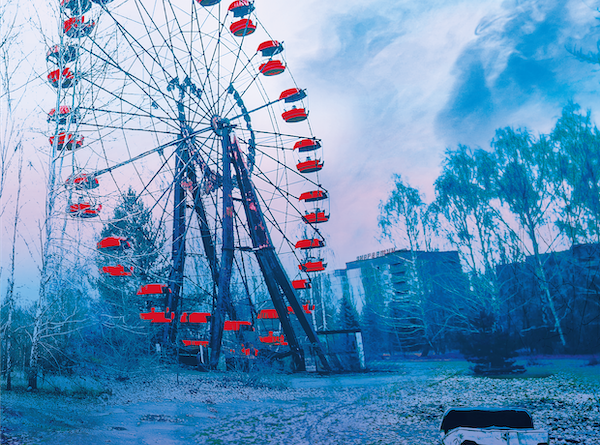 Previously, Soft Cell’s story had reached what seemed to be a definite end with their farewell show at the O2 in London back in 2018. That show, which featured a sold-out 20,000 capacity arena, provided a perfect showcase for the duo’s catalogue of synth-pop hits.

But rather than calling it a day, Marc Almond and Dave Ball perversely turned their attention to penning new material (in hindsight, a very Soft Cell thing to do).

“In this album I wanted to look at us as a society” suggests Marc Almond, “a place where we have chosen to put profits before people, money before morality and decency, food before the rights of animals, fanaticism before fairness and our own trivial comforts before the unspeakable agonies of others.”

*Happiness Not Included kicks off in a high gear with ‘Happy Happy Happy’, a sad lament for a lost future (“Rocket ships and flying cars”). It’s an effective melancholic pop composition that still has a chugging groove to drive it along .

‘Polaroid’ delivers an engaging little narrative about Marc Almond’s experiences meeting Andy Warhol in 1981. It’s essentially a travelogue exploring a lost New York, including appropriate nods to the many characters of the Warhol Factory scene. Almond’s clipped vocal delivery captures the ephemeral nature of time on a number that has a quirky charm.

There’s a more vital energy lurking at the heart of ‘Bruises on My Illusions’. It’s a darker, pulsing number that touches on the sleazy synth musings that epitomise classic Soft Cell (“Don’t have any money and nothing to sell except my soul”). Meanwhile, there’s a warmer aspect to ‘Purple Zone’ (now enhanced with the new Pet Shop Boys collaboration) with its lush synth moods and a great use of vocal melodies. As a result, it serves up one of the album’s best moments.

The analogy lurking on ‘Heart Like Chernobyl’ seems, sadly, to have adopted a more pertinent message given recent events in that part of the world. Fittingly, much of the narrative here ponders on the sheer weight of cultural baggage that any individual has to bear in recent times. It’s an acknowledgment that a grim 24hr news stream can actually desensitise people (“People escaping the war in boats/Tip them over and see who floats”).

Closing the album out, the dry pop of ‘New Eden’ offers up a starker affair with its lonely piano melody and some burbling low-key synths. The song tackles the inevitable challenge of getting older in its lyrical thoughts. At the same time, in its wistful yearning for a utopia, it serves as a perfect bookend to ‘Happy Happy Happy’.

*Happiness Not Included is an album that offers a sobering reflection of where we are as a culture in 2022. It may not be a cheery experience, but then again the album’s title is fairly apt for the material within.

Read our full review of *Happiness Not Included in the current issue of Blitzed. Order here: https://bit.ly/3KfWlcg