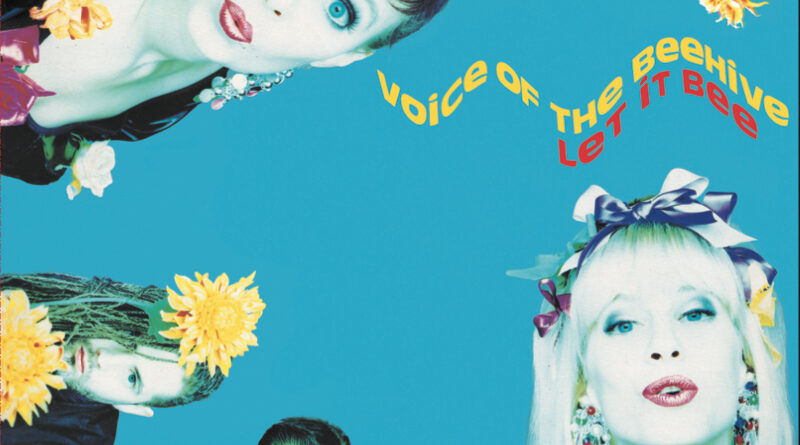 In the 1980s, sisters Tracey Bryn and Melissa “Missy” Brooke Belland (daughters of The Four Preps singer Bruce Belland) had decamped from their native California for the UK with a love for the country’s musical legacy, keen to forge their own musical path. Christening themselves Voice Of The Beehive, the sisters augmented their line-up with Mike Jones, Martin Brett, Mark Bedford and Daniel Woodgate (the latter two formerly of Madness). The result was euphoric guitar pop via memorable singles such as ‘Don’t Call Me Baby’ and ‘I Say Nothing’.

Tracey Bryn chatted to Blitzed as Voice Of The Beehive’s 1988 debut album Let It Bee gets reissued in an expanded format with additional tracks and liner notes from Tracey herself.

What were your formative years like when first starting out? What sort of music inspired Melissa and yourself?

We were California girls, I took dance, Missy acted. We had a fine life; we didn’t need want for anything. We weren’t spoilt, but we weren’t struggling. When I was in high school and I heard Chrissy Hynde, the Pretenders’ first record, I got completely obsessed with British music. Missy was more Ohio Players, Kool and the Gang, Earth, Wind and Fire. I loved Joni Mitchell. I loved Bow Wow Wow. I loved Adam and the Ants. The Smiths, I always say came later because I didn’t understand. I lived in California. I had no idea what he was on about, because I didn’t live in a small town in England.

Then the B-52s came along and we thought “Wow. That would be so fun…” And we would share music. We both have really different tastes, but there is a point where we meet in the middle. So, we would just listen to music and we would imagine more than writing songs, we would imagine what we wanted our image to be. It was kind of B-52s mixed with the Pretenders, where we wanted to appeal to nerds, because we didn’t feel like we fit in anywhere. We weren’t cool, we didn’t have the right clothes, we didn’t know the cool people.

So, we thought “Wouldn’t it be neat to have a band one day?” I sketched some pictures of what we’d look like on stage. So sure enough, I went to England, fell in love with London and didn’t want to come home. I had to come home for a week. I wrote ‘Just A City’ wishing I could go back to London. Finally, I told my parents “I’m going back. I don’t want to be here.  I’m meant to be in London right now.” So, I got on the plane, sold everything I own, went to London.

They showed interest in the song I wrote – “They” meaning the record companies and the demo people that listen to demos. Somebody liked it and they said, “You have an act.” I called my sister and said, “Get over here right now!” She got on a plane a week later and we started writing together. She started doing the harmonies and form the image and all that and then we eventually got a record deal.

But we had always had that in our minds when we were growing up in the San Fernando Valley, which is very generic, everybody is the same. We thought “How are we going to break out of this?” And we thought music was the way to do it.

What were your initial thoughts on reissuing Let It Bee?

I didn’t know anything about it and somebody said, you know, “we’re doing this”. Not “would you like it?”, “We’re doing this, it’s in the works. Got anything you can give story wise about the songs?”, which I love doing. “Got any memorabilia that we can do contests for?” And they kind of just took off and I think it’s great. I love writing about songs. Because I think the stories… sometimes they’re funnier or they’re unexpected: “You think that’s what that means? It doesn’t mean that to me.” So, it doesn’t mean it’s the right meaning, it just means it’s my meaning.

But it’s definitely been a dream and lovechild of Tim and Will and Beth from the record company, who loved the Beehive, who said, “Let’s get this, let’s do something with this.” So, I really appreciate that it wasn’t my idea. I didn’t appeal to them or approach them or ask them to. They thought that there was a niche for it and approached us and I’m happy, I’m thrilled and we’re releasing a song with more fanfare called ‘Cartoon City’ which is one of my favorite songs that never saw the light of day. It was a B-side on a third format or something and I’m really happy about that, because that’s one of my favorite Beehive songs. So that’s gonna see a little more light of day, so I’m really happy about that. So, it’s win, win, you know?

How do you feel about Let It Bee and the other Voice Of The Beehive albums today?

I really like it. I like all the records. I think that songs like ‘Look At Me’ are more relevant today than even when I wrote them. ‘What You Have Is Enough’, definitely in America is really relevant. I’m proud, I think that we made some really good records.

I understand Sex & Misery [Voice Of The Beehive’s troubled third album] and the whole thing and it’s not a Beehive record and blah blah blah. It’s a good record. It’s maybe not a Beehive record, but it’s a good record and I’m proud of everything. When I hear it reminds me of a really beautiful time. It reminds me of how much I love London. And I think they’re good songs. I think they stand up against a lot of other pop music that maybe doesn’t have as much meaning or maybe thought put into the lyrics. Does that sound, like, terribly conceited? (laughs)

One key element of Voice Of The Beehive is that although your songs tend to be very euphoric and upbeat, they also have this kind of barbed, edgy quality to them too in the lyrics. It seems to be an essential part of the Beehive DNA.

I think that that’s a really good point and it’s really insightful and it is totally intentional. In fact, we’re doing our favourite twenty songs and I realize that most of them are really happy and euphoric and B-52s and Blondie and XTC. But there are some… For instance, ‘Mad World’ by the guy who did it recently, really slow and dark. That’s in there too alongside ‘Dreaming’ by Blondie.  And I think if you combine that, that’s kind of my writing sensibility. I think somebody else who does it beautifully (and I’m not comparing myself to him by a stretch) is Morrissey. They’ll take a very melodic, upbeat tune and you listen to the words and it’s like “Oh my God, is he saying a double decker bus hit you, knocked you dead in the ground? Is that what he’s saying?” I love that kind of thing and Elvis Costello does it as well. He’ll sound euphoric and happy. But if you listen to it, it’s like, “Wow!”. My sister always says a spoonful of sugar helps the medicine go down. The sugar is the music and the lyrics are the medicine. So…

Read the full Voice Of The Beehive interview in issue 5 of Blitzed. Let It Bee is released via London Records 9 December 2022