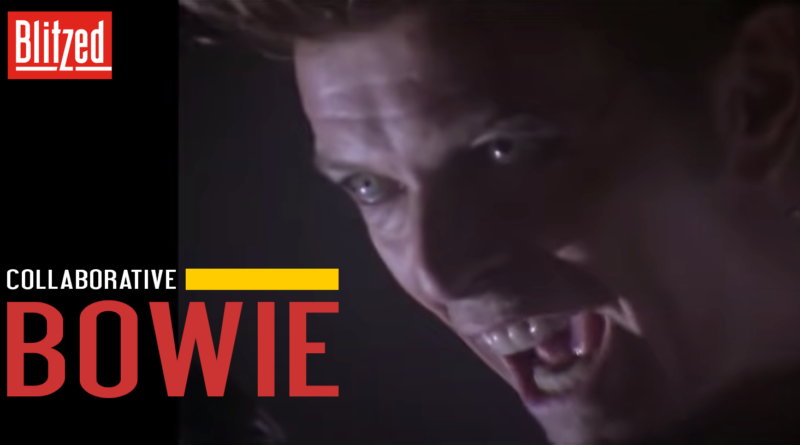 This week marks the birthday of David Bowie, who sadly passed away in 2016. Bowie was a legendary musician and innovator whose legacy had a huge effect on the Blitz club generation and beyond. His contributions to culture and music will always be remembered. On that basis, Blitzed has compiled a brief guide to some of Bowie’s more intriguing collaborations with other musicians.

Working on their Hot Space album at Mountain Studios in Montreux, Switzerland, Queen ran into Bowie, who was recording his vocals for the song ‘Cat People (Putting Out Fire)’. Bowie sang some backing vocals for a track on Queen’s album, but these were removed when he was unsatisfied with the results. Still, the two camps seemed to get on well and ‘Under Pressure’ emerged from a jam session separate from both projects.

The collaboration was incredibly successful, landing a No. 1 spot in the UK charts. It was also listed at number 31 on VH1’s 100 Greatest Songs of the ’80s and voted the second best collaboration of all time in a poll by Rolling Stone magazine.

Penned for Paul Schrader’s sexually charged film Cat People, this composition is an astonishingly powerful number that utilises the talents of both David Bowie and Giorgio Moroder (who had already been responsible for composing the film’s soundtrack as a whole).

The moody opening bars of the song were culled from the film’s opening theme (‘The Myth’) and serve as dramatic tension before the track explodes with Bowie emphasising the word “Gasoline!”. Moroder brings in Minimoog and Polymoog on board for a piece that just drips with angsty energy.

A re-recorded version of the song later appeared on Bowie’s 1983 album Let’s Dance.

Originally penned by Bowie for Iggy Pop’s 1977 album Lust for Life, ‘Tonight’ was later used as the title track for Bowie’s own 1984 album Tonight. The Bowie version also features guest singer Tina Turner (although she wasn’t originally credited on the single release). As a single, this release wasn’t one of Bowie’s most successful efforts, only reaching No. 53 in UK charts at the time. But the easy-going style has a warmth and charm regardless.

The video here shows Tina Turner doing her own live rendition, but with a surprise guest;)

This unusual collaboration between David Bowie and jazz fusion band Pat Metheny Group originally featured on the soundtrack to the 1985 film The Falcon and the Snowman. The composition had been worked up from an earlier instrumental that Metheny had written for the film.

The end result is an effective slice of soft rock that has a reflective mood at its heart. The song was also released as a single, reaching No. 14 in the UK charts and No. 32 in the US.

The theme song to the BBC TV series, the song was re-recorded with Lenny Kravitz for Bowie’s album, also titled The Buddha of Suburbia.

The song’s nostalgic lyrical narrative also weaves in some references to previous classic Bowie songs, including the guitar break from ‘Space Oddity’ and a brief lyrical nod to ‘All the Madmen’ (from Bowie’s 1970 album The Man Who Sold the World). Released as a single, it reached No. 35 in the UK singles chart.

This remix of a track that originally appeared on Bowie’s album 1. Outside also features the talents of synth-pop legends Pet Shop Boys. The stunning transformation of the song into a euphoric slice of cosmic pop marks out this collaboration as one of Bowie’s best.

Neil Tennant and Chris Lowe had suggested reworking lyrics from Bowie’s earlier song ‘Space Oddity’ into the remix. Although Bowie was initially sceptical, both Tennant and Lowe employed Bowie’s own method of cutting up and rearranging the lyrics to present a strange yet mesmerising narrative (which won Bowie over). Bowie, Tennant and Lowe later performed a live version of the remix at the Brit Awards in February 1996.